Also called Gateway to the Underworld. I was like, finally, a non-stop trip to where I came from!

This has been on my surreal list for a while, and it took me three months after I moved to Washington to make this trip happen. I was totally blown away by the sheer force and power of nature you can witness here.

Thor’s Well is basically a seemingly bottomless pit (its actually like 20ft deep) sitting at the edge of the Oregon coast. Its like a sinkhole thats drinking all the seawater rushing around it. And then spits it out 20ft into the air. The best times to actually see the phenomenon is an hour before and after high tide. It can be quite dangerous to stand at the edge of the well, especially if conditions are a bit rough. We did see a lot of avid photographers risking it to get that perfect shot of Thor’s Well. The visitors center had helpfully put up the tide schedule, which is also available online, to plan your trip. 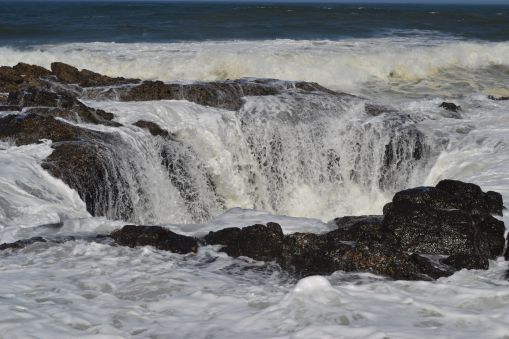 We took the Captain Cook Trail (named after the person who named Cape Perpetua Scenic Area) and walked down the paved trail to the tide pools. It’s a pretty easy hike, mostly flat and rocky.

Spouting Horn is another phenomenon that can be seen on these tide pools. It is a saltwater “fountain” that spouts water into the air. You need to be really lucky to see it put up a magnificent show, but what is intriguing is the loud hissing sound it makes when the water gushes upward. If conditions are right, it can be quite dangerous to stand at the edge of the tidepools – ocean water can rocket to amazing heights. 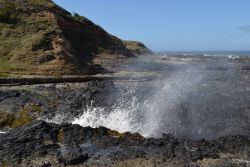 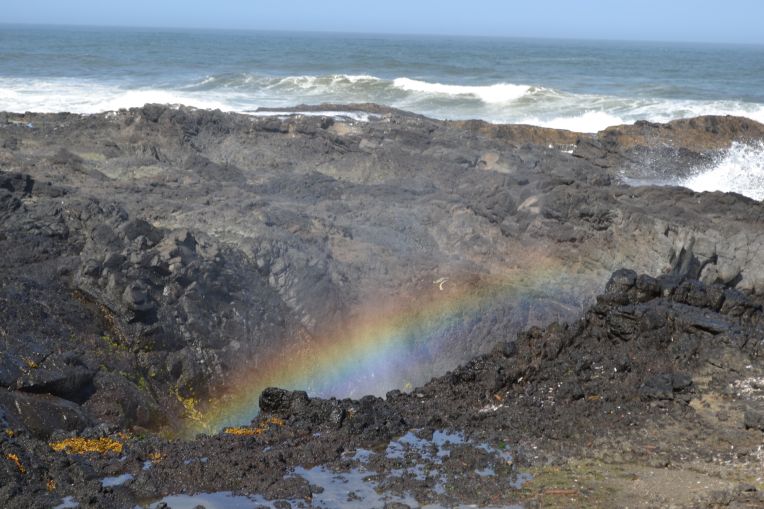 A rainbow spectrum peeking out at us!

Both Thor’s Well and Spouting Horn can be viewed at a safe distance, from the Cooks Chasm viewpoint. It is on a bridge, off the 101 highway and has some spectacular views, especially at sunset. We hiked the tide pool trails in the morning and then drove up to the highest point of Cape Perpetua, a viewpoint 800 feet above all the magic happening down at the tidepools. The view is not too shabby at all. 😉 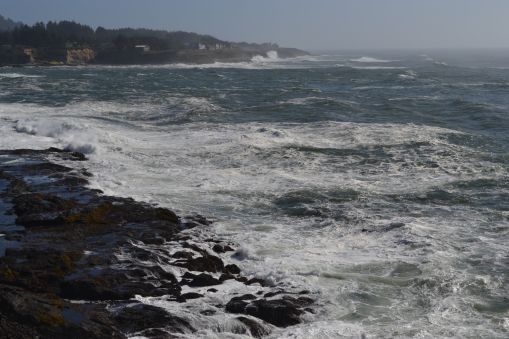 We drove back to catch the sunset at Cooks Chasm. And boy, it was awe-inducing.

Can you spot the adventurers down at the edge of thor’s well?!

This trip was just amazing. Such spectacular natural wonders really feeds my gypsy soul, that just wants to keep wandering to different corners of the world!

Lets see where my travels take me next!